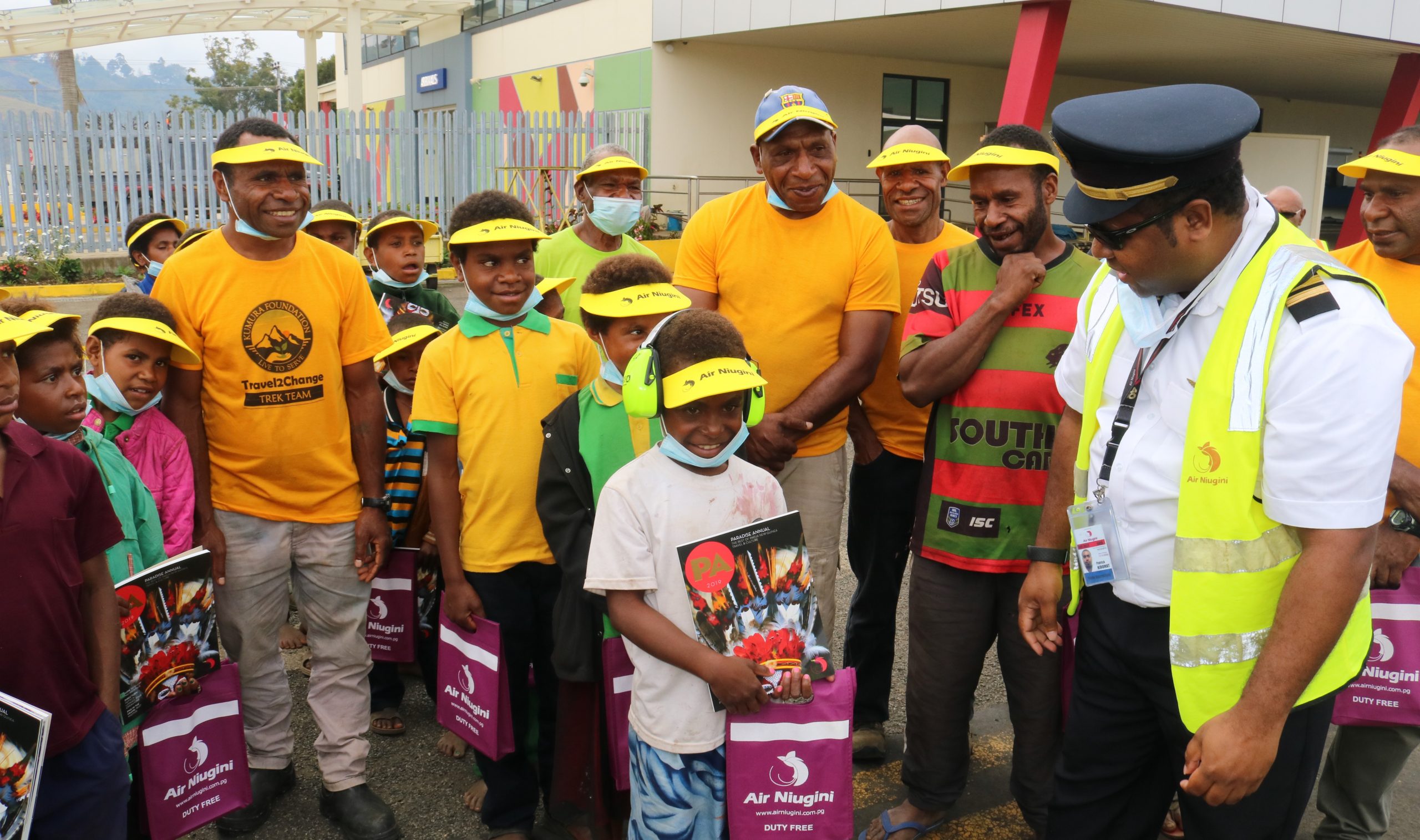 The twenty four children from remote Bundi, Madang have now arrived home and settled in at Mondia bridge Transit House at the foot of Mt Wilhelm, Chimbu after a memorable, inspiring day at Goroka airport yesterday with Air Niugini pilots and cabin crew.

The children, mostly orphans between the age of six and 11 had not only fulfil their dream of seeing an Air Niugini aircraft for the first time, they had the opportunity to also board the plane and meet Air Niugini pilots, Captain Nama Mariole and First Officer (FO) Patrick Kiromat.

FO Kiromat said “We are humbled to have crossed paths and be a small part of the lives of these little children and the journey they’re taking. We need more professionals in the aviation industry and we hope, we can be an inspiration to these kids, if we can inspire at least one of them, that’s good enough”

The oldest kid among the group, 11 year old Willie Kuri expressed his  excitement in meeting the pilots and watching an Air Niugini plane land for the first time. Willie said most of their experience in Goroka is new including airplane, something they will all remember for a long time.

Captain Mariole, FO Kiromat together with the cabin crew interacted with the kids for sometime before taking them onboard the aircraft for a tour. The kids were also presented with a gift bag each containing Air Niugini merchandise. There was so much excitement, fun and laughter every step of the way.

These kids come from very remote areas of Bundi in Madang Province bordering Simbu and Eastern Highlands, the disadvantage areas where there are no basic health and education services.  They are looked after by Kumura Foundation and reside at the Transit House at Mondia Bridge in the Kundiawa Gembogl District while attending school at Irugl Primary School located at the foot of Mt Wilhelm in Simbu Province.

The foundation raises funds to pay the kids’ tuition, feeds them and looks after them for the academic year.

Founder of Kumura Foundation, Vincent Kumura thanked Air Niugini for making the kids’ dream come true, describing it as the greatest highlights of their excursion in Goroka.

“Meeting the pilots will surely inspire and motivate them to work hard to reach their goals in life. This is really a pinnacle of their adventure. They were nervous and excited at the same time before the plane landed as they didn’t know what to expect. They will never forget this experience and will continue to tell other kids and the people back home,” Kumura said.

The children were in Goroka for a two-day school excursion where they visited several organisations and settings in town including visit to the airport to see Air Niugini. Their initial plan was to stand outside the fence at the airport to get a glimpse of the plane but Air Niugini was able to bring them closer to the tarmac and into aircraft where they also met the pilots and the cabin crew.

Their journey began on Monday, 6th July on foot for almost two hours from Mondia Bridge to Gembogl to catch the bus. It took them about another 2 hours to reach Kundiawa town by bus and another four to five hours bus ride to Goroka.

The kid’s first airport and airplane experience was made even more special when they were surprisingly met by Prime Minister Hon. James Marape who was on the same flight. He took sometime to greet and talk to the children.

These children also had the opportunity to witness for the first time a guard of honour, performance by Asaro mudmen and media interview with Post Courier, The National, EMTV and TV Wan.

“We are also inspired by what Vincent and the Kumura Foundation and all the work that they have done and are doing to improve lives of people in the remote communities in Bundi and especially the most vulnerable children.”  FO Kiromat concluded.