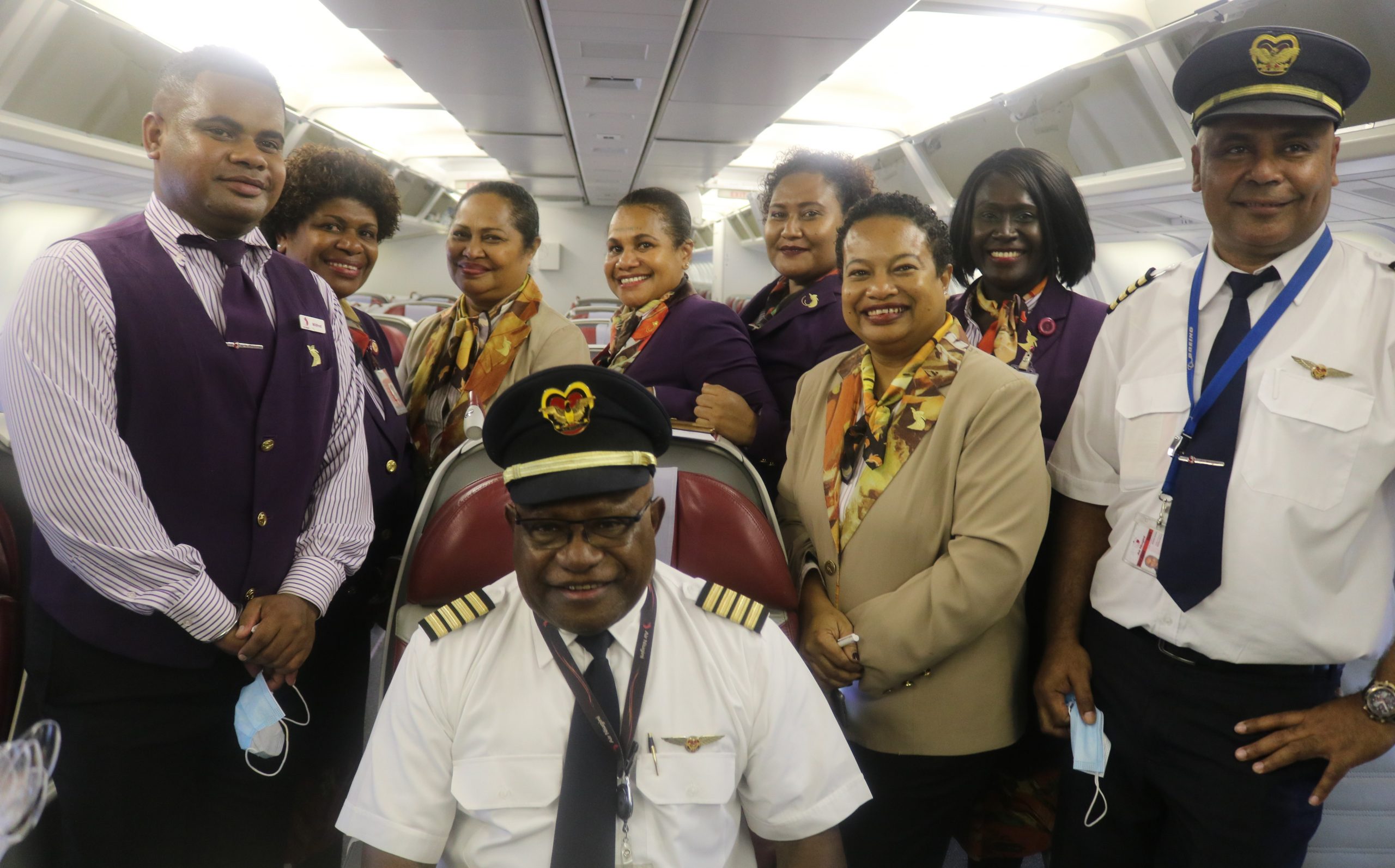 Papua New Guinean pilot Captain Paul Kodor had retired in February this year after flying with Air Niugini for 34 years, leaving behind a great legacy including training a large number of pilots including many of the PNG nationals who are now flying the airline’s Boeing aircraft.

He is Air Niugini’s first national pilot to have retired upon reaching the age of 65, following his final flight, PX004 on the Boeing 767 from Brisbane to Port Moresby on February 2, the day he turned 65 years old. 65 years is the maximum age approved by ICAO for pilots on international flights.

His greatest achievement was becoming a Check and Training pilot on the Boeing aircraft following Civil Aviation Safety Authority (CASA) PNG’s approval in 2004. Over the years, Captain Kodor conducted at least seven type rating courses which involved 14 pilots, mostly First Officers (FOs) trained under his wings, many of whom are currently flying Air Niugini’s Boeing aircraft.

He said “I leave Air Niugini on a high note, proud to have given my time in training to about half of the Boeing pilots in the fleet. Basically, I have been training all my flying career and it gives me great satisfaction to see younger pilots moving up in their career.”

Apart from training pilots, Captain Kodor also designed an in-house B767-300 Type Rating course, which he described as challenging.

Kodor commenced his career with Air Niugini in September 1986, joining from PNG Defence Force Air Transport Wing where he flew for 10 years.

He said, “I walked into Air Niugini without going through any job interview, and commenced my Dash 7 engineering course around September 1986. On completion, I was again advised to remain in the Training Centre to commence on Fokker 28 engineering course and just before Christmas, I completed my Fokker course. I believe ANG was using me as a guinea pig, which I found out later that the company at that time had never sent any direct entry pilots to Fokker aircraft.”

“I was fortunate to have had a very smart and experienced trainer, Captain Granger Narara who had a time of his training career to convert my mind set from flying at 100 -120kts ground speed on Dash 8, increased to about 300 – 400kts on Fokker 28, meaning you have to think faster.”

Captain Kodor started his Fokker command training in 1994 and by 1997 to1998, he started training young and upcoming FOs to the Fokker fleet. After training and checking four FOs to line, he was then promoted to Airbus A310 in 1999 and by January 2002, he got his command on the Airbus A310.

“By then, I finally reached my ultimate goals of becoming an International Airline Transport pilot, Check and Training pilot, and achieving Instrument of Authorization (IOA) from CASA PNG. “

“When Air Niugini sold the Airbus A310 in 2002, I was sent with the rest of the pilots who operate wide body aircraft to New Zealand to train as captain on the Boeing 767-300 aircraft to operate on Air Niugini international routes.”

A role model to many young pilots and those aspiring to become a pilot one day.

Captain Kodor’s interest for flying began at the age of four when he came across a toy plane whilst growing up in the 1960s in Awar village, Bogia District of Madang Province.

“There was a family in the village whose father was a cook on a ship. One day he brought home a toy plane causing curiosity among my age group. I was so interested to know as to how this thing works and who works on it. That increased my level of interest to know how the real thing works,” he said.

Looking back at his childhood growing up in Madang, Captain Kodor started his early primary education at Bogia in the late 1960s. He went on to do forms 1 to 4, equivalent to grades 7 to 10 as a pioneer, at the then SVD High school, now Divine Word University from 1970 to 1973. He then completed grades 11 and 12 at Sogeri National High School from 1974 to 1975.

Captain Kodor was then offered a Government flying scholarship to Cesnock in New South Wales however due to lack of funding, he was among six students who were sent back out of the twelve. He was later accepted to do pilot training with the PNG Defence Force and sent to Australia’s military flying school, the RAAF Base East Sale in Victoria where he got his wings upon graduating in 1977.

He then flew with PNG Defence Force Air Wing for 10 years before joining Air Niugini, this totals up to 44 years active flying.

“The top lessons I have learned from my experience working with the national airline is to treat everyone the same, work as a team to meet the company’s goal, and maintaining the company’s highest safety standard. Over the decades, Air Niugini’s safety standard is one of the best and on par with the other major carriers around the world.

“Keep the safety standards, never compromise. I will surely miss flying my favourite Boeing 767 aircraft and colleagues who I have interacted with on a daily basis. They all made my journey a memorable one,” he added.

Captain Kodor encouraged those still with Air Niugini to always have a vision and work hard towards it.

Captain Kodor is married with seven children and nine grandchildren.

“Thank-you Air Niugini for giving me the privilege to serve this wonderful organization which I leave with fond memories. To those still flying the Bird of Paradise, be a proud patriot and happy landings,” he concluded.