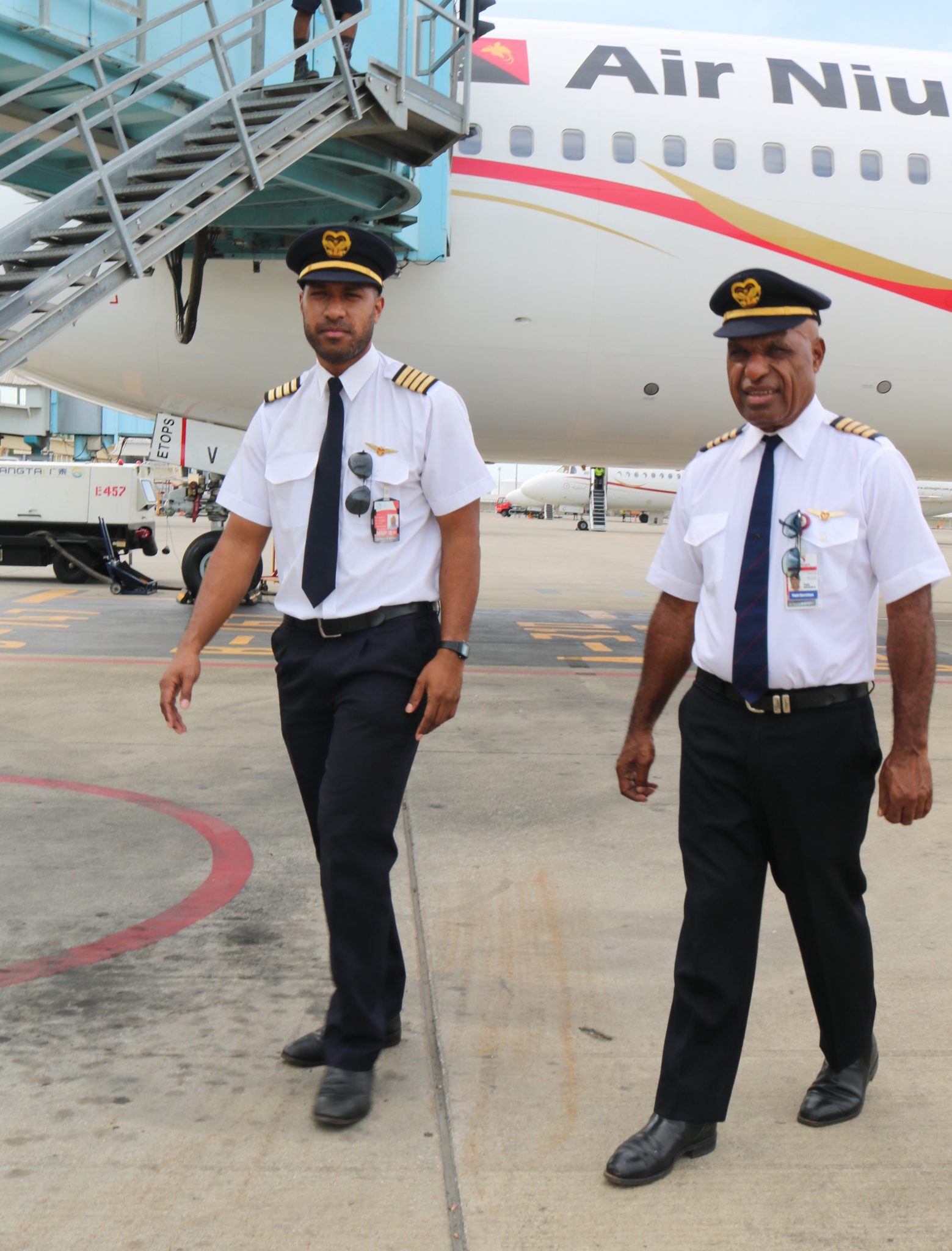 Air Niugini’s most senior Boeing Captain and the longest serving pilot Captain Paun Nonggorr and his son, Captain Jason Nonggorr have made history by becoming the first Papua New Guinean father and son Captains flying for the national flag carrier.

From the Koepka Ramdi Tribe of Koepka, Mount Hagen, Western Highlands, Captain Paun Nonggorr was also the youngest national to have attained Captain on Fokker F28 jet aircraft at the age of 26 in 1983. He has been with Air Niugini for 44 years, 35 of these years, since 1985, flying Air Niugini’s wide body Boeing 767, Airbus 310 and Airbus 300 aircraft on International routes.

Despite all his flying achievements, as a father nothing beats seeing his son following in his footsteps, and even better, flying for the same airline and together as Captains. Captain Jason Nonggorr attained his command as a fully-fledged Captain on Fokker 100 jet aircraft six months ago, a proud moment for the Nonggorr family, Air Niugini and also Papua New Guinea.

Senior Captain Nonggorr said, “A lot of hard-work, commitment and discipline is required to become a pilot. Jason has reached a milestone in aviation from being a pilot to becoming a fully-fledged Fokker F100 Captain and we his families from Mount Hagen and his mother’s people from Wuvulu Island, Manus are proud of his achievement.”

His son, on the other hand said it is a great personal achievement to hold the command of a Fokker 100 aircraft which is the result of a lot of hard work, determination and dedication.

“To have achieved this with the National Airline where my father is considered a pioneer of aviation in PNG gives me a sense of great pride within myself, my family, Air Niugini and also the country.”

His father recalled asking the son after he completed high school what he wanted to do in life and his answer was, to be a pilot.

“Having been through and knowing the rigors of making it as a pilot myself, I had no doubt that Jason possessed the attributes to be successful as he understood what was involved in making it as a pilot. Now Jason has the necessary experience to pilot any aircraft in the aviation world”.

Being raised by a pilot for a father and a mother who previously worked as a flight attendant with Air Niugini, this helped Jason’s drive in signing up for a pilot career.

“My earliest childhood memories are that of watching my father command the Airbus A310 aircraft from the jump-seat which further increased my fascination about aviation and inspired me to become a pilot,” Captain Jason Nonggorr explained.

Jason is 30 years old and is the second of three siblings. He has flown with PNG AIR for 7 years making Dash 8 Captain after attending flying training in Archerfield, Brisbane privately paid for by senior Captain Nonggorr. Jason joined Air Niugini three years ago as First Officer on the F100 and has now made it as Captain six months ago.

Jason added, “It would be an incredible milestone and humbling experience to one day operate the Boeing 767 alongside my father.”

The 63-year-old commenced with Air Niugini in June 1975 as a cadet pilot then a first officer flying on the Fokker Frendship (F27) before becoming the first young PNG Captain on F28 jet aircraft with Air Niugini. He was only 26 then.

Senior Captain Nonggorr recalled flying the F28 aircraft was challenging because it was an analogue aircraft and required a different set of skills.

He said, “PNG is one of the most difficult places to fly in the world due to the challenging localised weather patterns and rugged terrain which makes domestic flying very challenging, however, it was fun, exciting and incredibly satisfying.

He then moved to operate the Airbus A300 in 1985 for four years prior to the A310 which he flew for 14 years on Air Niugini’s international routes.

The greatest achievement for Captain Paun Nonggorr’s flying career was attaining his command as a first young National F28 jet Captain in 1983 after a few years Captaining the old F27. This was followed by Airbus 310 and Boeing 767 aircraft. He has been flying the B767 for 17 years. He holds seniority number 1 of all pilots National and Expatriate in Air Niugini.

He is also a qualified Flight Instructor for Ab Initio Flight Training for student pilots.

“The secret that keeps me flying all these years is that it’s fun to have an office way up among the stars. Although, it can be stressful at times, it comes with self discipline and some regimentation. You also get a good idea of all aspects of what happens around the world,” he said.

His advice to young, aspiring Papua New Guineans who wish to become pilots is dedication and determination.

“Any average PNG young person can be a pilot and fly a big jet aircraft like the F100 or B767, and any other job as long as they are prepared to work hard. There is no PNG way of flying any aeroplane and there is no easy pass to any job in life,” he said.

He further encouraged parents to be supportive of their children’s upbringing, education, and dreams by giving children the best of their time, attention and love during the formative years.

He said, “Parents must realise when they have children, it is 24 hours a day, 7 days a week and 365 days a year commitment. This forms the building blocks for a child’s success in life including their child becoming a pilot.  All success by children starts at home with mum and dad.”

Captain Nonggorr gave credit to his wife Anne who has dedicated all her time to raising their three children while he was always away working.

“She basically brought the kids up on her own as I have been away most of the time but I made sure I had quality time with them when home,” he said.

Captain Paun Nonggorr thanked Air Niugini for giving him and his son the opportunity to fly with the airline, adding that Air Niugini has been his life and means the world to him and his family. Being a pilot with Air Niugini was his first and only job in his working life and it will be his last job.