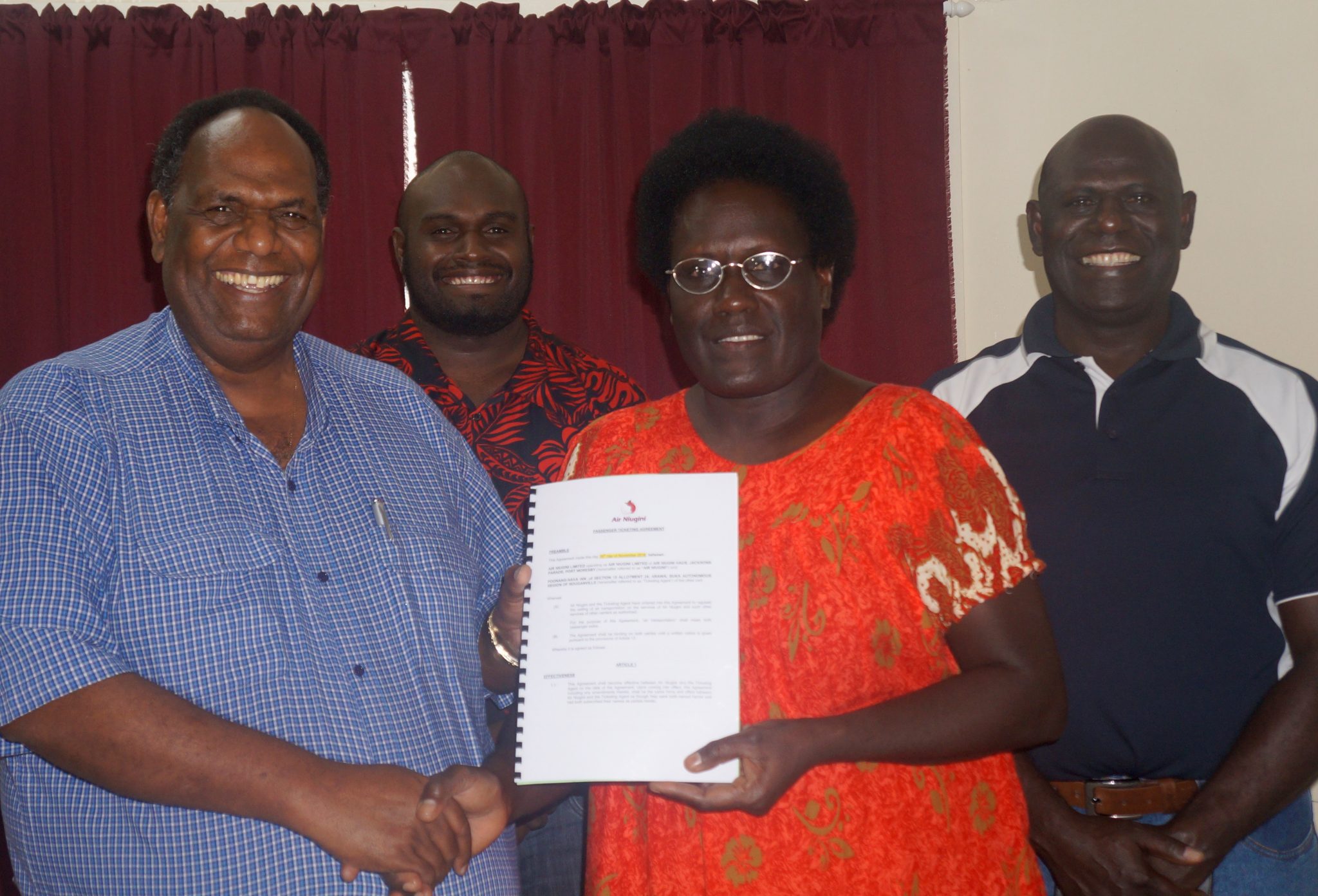 Air Niugini has outsourced its sales office in Kieta, Autonomous Region of Bougainville to a Travel Agency this week, bringing the total number of offices outsourced so far to three.

The airline’s General Manager, Customers and Markets Dominic Kaumu and Manageress of Poonang Travel Agency, Pamela Dasiona signed an agreement in Kieta on Wednesday to seal the handover/take over arrangement.

Mr Kaumu said ANG will continue to outsource ticket sales and airport services at selected domestic centres as part of the airline’s effort to streamline operations, however its major domestic ports will not be affected.

He said “ While we endeavour to streamline operations, it is also the airline’s way of giving back to the community and we are confident of the people that we appoint to continue the sales and ticketing work for Air Niugini, Poonang Travel Agency is no exception.”

Mr Kaumu also said it is Air Niugini’s way of supporting and promoting tourism in the Autonomous Region of Bougainville and in this case, Arawa by partnering with a local who is already in the tourism industry to continue the airline ticketing responsibility. Mrs Dasiona and her family run a lodge and other small businesses in Kieta.

Mrs Dasiona said to maintain services which have been provided by Air Niugini for a long time is not easy, however she is confident they will continue to maintain and operate according to Air Niugini standards.

Poonang Travel Agency is located in the Arevai building in the centre of Arawa town.

“We are happy and humbled for the confidence Air Niugini has in us and will maintain ANG standards as we serve the travel needs of our people of South and Central Bougainville.”

A number of domestic ports serviced by Air Niugini are being outsourced through a carefully managed process, ensuring a seamless transition.

The airline industry around the world is moving towards modern and smarter practices to remain competitive within an ever changing economic and technological environment. To this end, Air Niugini is also getting on board to embrace a change in the way it conducts its business.

Air Niugini will be advertising in the local media with interested parties to undergo a screening and selection process to ensure they have a proven financial and business capability and the capacity to meet aviation regulatory requirements that meet PNG Civil Aviation and Safety Authority (PNGCASA) standards.

So far, Lihir Sales Office in New Ireland, Moro Southern Highlands, Bulolo in Morobe and now Kieta(AROB) have been outsourced. The other smaller ports will follow suit in a carefully managed outsourcing process.

The National Airline Employees Association has been well briefed by Air Niugini management and has been engaged in the process from the outset. Employees affected by the outsourcing exercise are processed appropriately under the terms and conditions of employment.