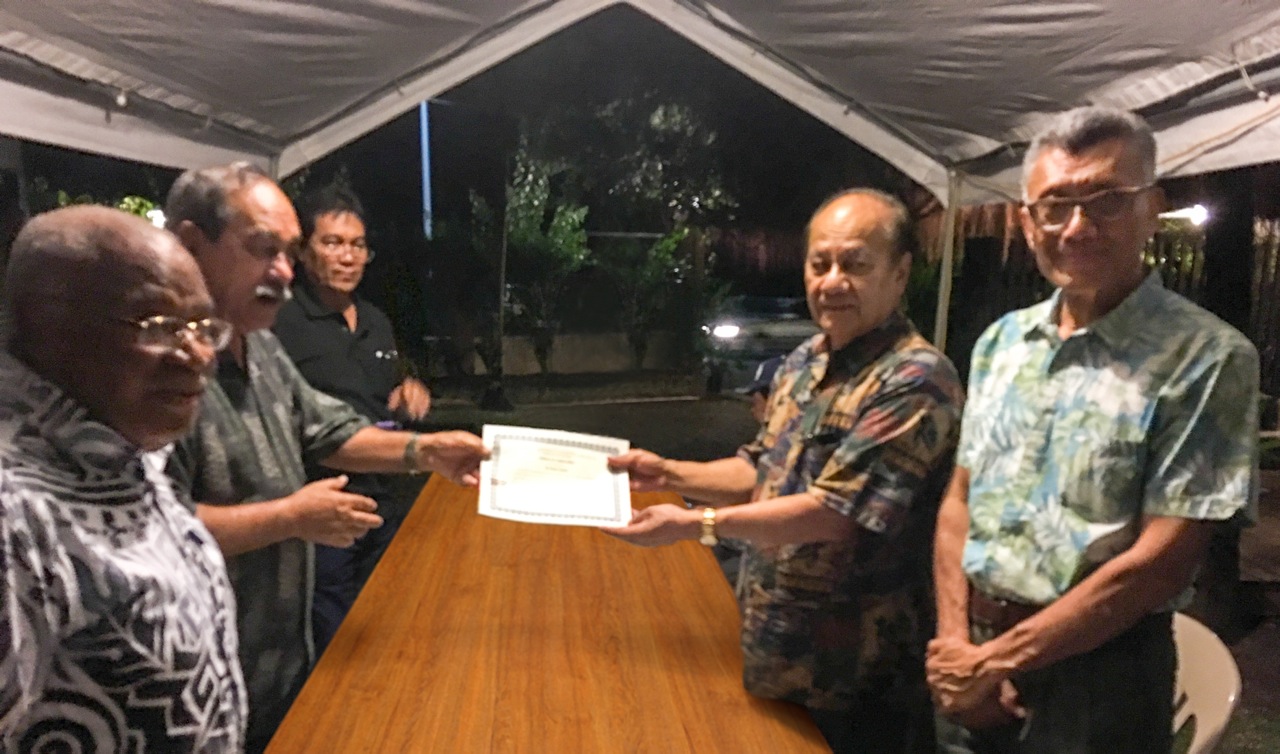 The development of Port Moresby’s Jacksons Airport as the leading regional “hub” for air travel in the Pacific has been given a major boost with Air Niugini being chosen by the Federated States of Micronesia to provide regular air services to the vast island nation to the north of Papua New Guinea.

The Chairman of Air Niugini, Sir Frederick Reiher, led a delegation, which included Director Sir Noel Levi, Chief Executive Officer- Simon Foo and General Manager Commercials- Dominic Kaumu, to the Federated States of Micronesia (FSM) last week for discussions with the FSM Government and the Chamber of Commerce in the capital, Pohnpei.

Sir Frederick said his delegation’s visit was the result of the discussions between the FSM President and PNG Prime Minister at the 2015 Pacific Forum Meeting held in Port Moresby during which the President invited Air Niugini to establish a regular air service between PNG and FSM.

“The FSM President, His Excellency Peter Christian, handed to us the Foreign Air Carrier Permit formally approving the commencement of Air Niugini’s twice weekly commercial air services at the beginning of December this year”, he said.

“In his discussions with our delegation, President Christian described this agreement with Air Niugini and PNG as a practical sign of how co-operation between the Pacific Islands Forum members works for the real benefit of member countries, and he would be holding follow up discussions with our Prime Minister, Peter O’Neill during this week’s Forum meeting in Pohnpei”.

Sir Frederick said the FSM government and the local business community, undertook to give their full support to the new service, and work with Air Niugini to ensure its long term success. So that the financial risks associated with a new international service can be managed, Air Niugini has asked the FSM Government to share the risk involved in establishing this new air service.

“I am delighted that the President and his government responded positively to our request, and have agreed to provide a firm response when the financial year begins in October.”

“The services Air Niugini will provide offers Port Moresby as an alternative hub to Guam, and will reduce considerably both travel times and the cost of airfares, and the not insignificant difficulty associated with the visa requirements.”

Sir Frederick said Air Niugini would work closely with the FSM Government, and its business community, including its tourism sector, to ensure the new service is a success, and particularly helps develop the island nation’s significant tourism potential.

“The new service will also strengthen relations between PNG and FSM, and add to PNG’s growing leadership role and participation in the Pacific.”

“In addition to last Thursday flight, Air Niugini will operate two more special services to Pohnpei this week on Wednesday and Saturday to assist with transport arrangements for the Pacific Forum Leaders meeting which FSM is hosting.”

Sir Frederick said the strategy being implemented by Air Niugini will see Port Moresby become a major regional hub for travellers from FSM, Solomons, Vanuatu, Fiji, and Australia travelling to PNG and beyond – including to Bali, Singapore, Hong Kong, Manila and Narita.

“The further development of services that will add to the effectiveness of the regional hub is under active consideration by the Board and Management of Air Niugini.”

“The establishment of Port Moresby as a major regional air services hub will provide considerable economic benefits for Papua New Guinea, and it will also help boost our growing tourism industry in particular.”

“Providing more air service connections at Jacksons International expands the economic benefits of the airport’s operations to the wider community, including airport service providers and our tourism and hospitality sectors. As this important regional network develops it will help keep downward pressure on domestic travel costs for Air Niugini customers and the general public,” Sir Frederick said.

“Air Niugini appreciates the strong support for the development of the regional hub, as well as our own expansion plans, given by the Prime Minister and by the Minister for Public Enterprises and State Investments.”

“We are privileged to have the opportunity to provide significant tangible support for Papua New Guinea’s growing regional leadership being driven by the Prime Minister in particular,” Sir Frederick concluded.