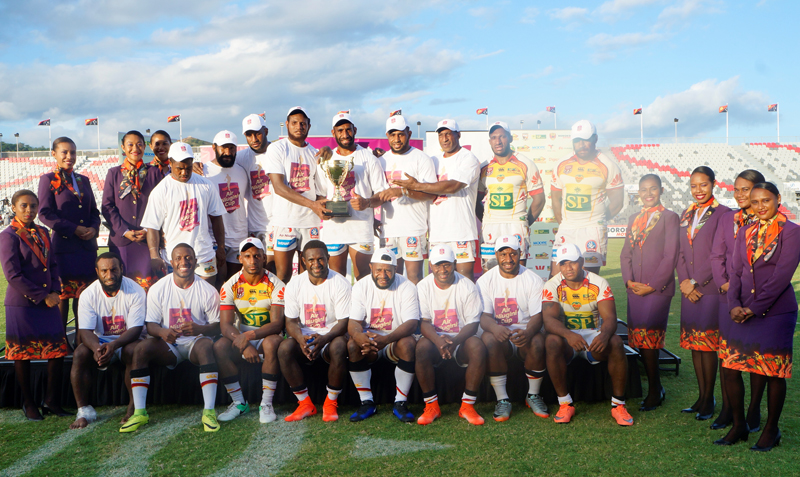 The inaugural Air Niugini Kokoda Cup was launched in a colorful ceremony on Sunday at the National Football Stadium in Port Moresby, coinciding with the Queensland Intrust Cup round 12 match between SP PNG Hunters and Townsville Blackhawks.

Six Air Niugini cabin crew in full uniform carried the cup out onto the field and handed it over to the captains of SP PNG Hunters and Blackhawks to mark the launch of Air Niugini Kokoda cup. They were accompanied by the airline and PNGRFL officials.

“ As an airline, Air Niugini appreciates and commemorates the importance of Kokoda ,  its significance what it means to both PNG  and Australia. This cup is also in appreciation of the recently launched service between Port Moresby and Townsville,  take advantage of the cup, go out there and support your favorite teams.”

He said the event will be held annually where Air Niugini will give a different name to the cup each year to commemorate important events in Papua New Guinea.

He encouraged Papua New Guineans living in and around Townsville, supporters of the Blackhawks as well the business and corporate community to make use of the event.

“ Those in Port Moresby can also fly to Townsville to watch SP PNG Hunters play, visit families and friends, do business and return. And those in Townsville can come up here to do business and watch the game in our newest sports facilities”. Kaumu said.

Air Niugini operates two direct services from Port Moresby to Townsville in a week, every Monday and Friday.

PNGRFL CEO Reatau Rau  thanked Air Niugini for its continuous  support towards the SP PNG Hunters as well as rugby league throughout the country with discounted airfares for their travel.