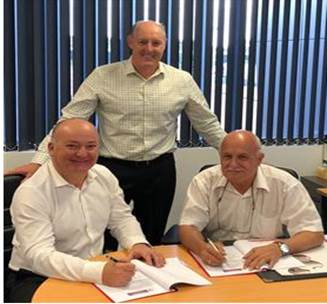 ANCL’s General Manager, Mr Gus Kraus said the agreement has been in the making for several months with all parameters of a “new found business partnership” having to be considered but in general, it’s a straight forward Cargo Agency appointment that paves the way for a more concerted effort in developing ANG’s cargo business.

Mr Kraus said “ The way forward for ANCL was to outsource this facet of our cargo business in major markets to experts in cargo and we are joining ACP’s portfolio of carriers with good network & global coverage.”

“With ACP representation and the background expertise of professionals, it was an easy task to convince our Cargo Board Chairman and team that the best and most effective way forward was to identify the best fit partner in Australia and make the appointment. We welcome this new bold initiative and trust that the new partnership will be mutually rewarding into the future.”

ACP’s QLD Sales Manager Dave Harris said they are very excited to be representing Air Niugini Cargo Limited and look forward to maintaining the partnership now and into the future.

Mr Harris said “ We have a clear directive to enhance the brand within our region and we are very aware of the significance of the air links between Australia and Papua New Guinea and the important role we play in facilitating Australia’s exports to such an important market. “

ACP Worldwide Director, Australia & New Zealand, Mr Ross Di Lizio said “Air Niugini Cargo have been a major part of the airfreight landscape in Australia for many years and they are more than happy to work with Air Niugini Cargo.

“ We are very proud to be chosen by Air Niugini Management to represent the airlines cargo interests on a nationwide basis. We see their decision as a true reflection of our professional and hard-working profile” Mr Lizio concluded