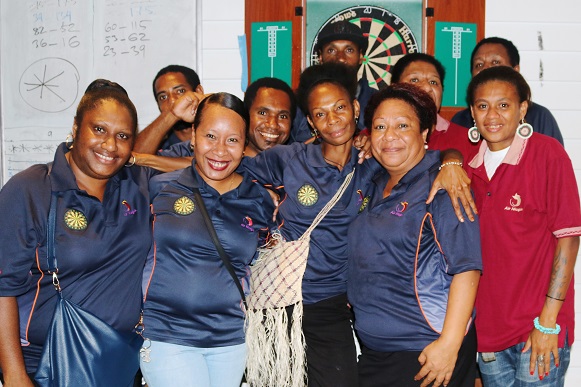 The first ever annual John Kilawari Polume (JKP) Memorial Cup Dart competition for Air Niugini staff ended on a high note over the weekend with the finals played.

Team Terminals, also the minor premiers in the competition, won the Cup title after defeating Team IT in a close encounter.

The JKP Cup competition pays tribute to a former long service staff the Late John Kilawari Polume who served Air Niugini for 30 years before his passing on October 6, 2018.

He was the Pricing Manager at the Pricing and Tariffs Department at the time of his passing.

On behalf of the Polume family, his daughter Nicole who is an Aircraft Maintenance Engineer (AME) with Air Niugini thanked the sponsors and the organizing committee for staging the event in honour of her late father.

“We, the family are honoured to have Air Niugini staff come together to put up a competition in my father’s memory as he was a strong advocate, supporter of young people and was heavily involved in social activities within Air Niugini.”

She thanked the sponsors of the event including the Air Niugini Savings & Loan Society and the players who took part to make this first ever event a success.

The Cup winners Terminals won most of their games and only lost 3 games throughout the season.

Captain of Team Terminals, Thelma Poneleu said they started off on a good note and had really done well with most of the players who were just beginners.

She said her team members played their best and were confident to win. It was the team spirit they had that got them through.

In the Plate final, cabin crew team Sky Walkers finished on top to win the title after defeating Aviation Security.

The grand final was followed by the dinner presentation of awards with individual awards also presented to outstanding players.