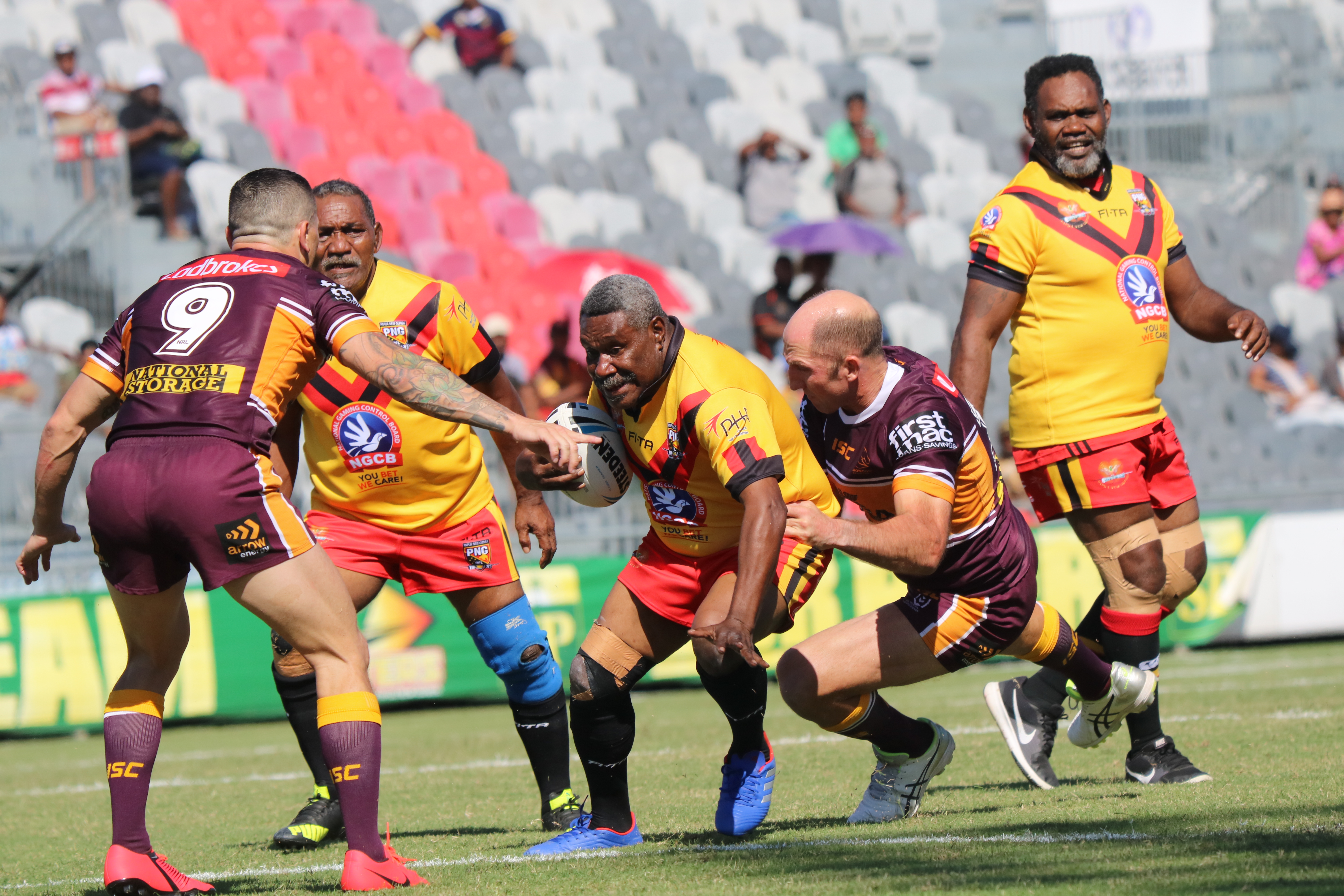 It was an emotional moment for PNG Kumuls legend Richard Wagambie wearing the PNG colours again after 28 years since playing an international Test match.

The former Kumuls Test Center and Air Niugini staff member was included in the Kumuls Legends team as coach/player who played against the Brisbane Broncos legends on Saturday, 31 August 2019 at the Oil Search National Football Stadium(NFS) in Port Moresby.

Wagambie, who hails from Tui village, Hawain in Wewak, East Sepik Province, recalled wearing the Kumul jumper again which brought back a lot of memories and emotions.

He said, “A lot of us actually had tears in our eyes. It hadn’t dawned on us until just before we were running out when I reminded the guys that we were playing a Kumuls match and that we must stay focused and be mentally ready for the game. I told the legends to take the game as an international match as we represent PNG again with our families including our grandchildren present to watch us play.”

It was a good game however the Broncos came out winners 32-44.

“The younger players were too fast and greedy with the ball, so next time they’ll have to give some opportunity to us the older ones,” Wagambie pointed out with a smile.

The 54 year old began his rugby league career at the age of 17 while attending Sogeri National High School in 1982.
Wagambie got selected into the Kumuls in 1990 at the age of 27 and has since played eight test matches with the Kumuls between 1990 and 1991 where he had the opportunity to tour Australia, New Zealand, France and England.

“I was in the spotlight at age 21 but was considered too young to play at the high level until 27 when I got selected. When I turned 29 I was too old to continue that’s when I retired from Kumuls,” Wagambie explained.

He revealed the highlight of his career was playing his first Kumul Test match in Goroka against Australia and playing against opponent Mal Meninga.

“Meninga and I both wore the number 4 jersey however I was 78kg and he was over 100kg but I always believe that I played well against him,” he added.

Wagambie played with Paga Panthers and Tarangau prior to joining the Kumuls then went on to play professional rugby league in France with the Carpentras rugby league club in 1992 after retiring from the Kumuls.

Wagambie was the first Papua New Guinean to play professional football in France. He played there for 2 years before returning to the country. He retired from playing in 1994 and went straight into coaching.

The Kumul number 142 has been involved in rugby league for 36 years now as a player, administrator and coach. He started coaching Tarangau in 1994 to 2002.

He then returned to coach Paga Panthers in 2003 till today. He also runs the administration for the club which has been successfully going for 16 years now.

Wagambie’s highlight as coach was winning the Ipatas Cup in 2016 where Panthers was the first club in the Southern Region to take out the title. Panthers won the grand final of the Pom Rugby League competition in 2010 and have always made the finals in other years.

Rugby league has grown over the years with more following and better facilities that meet international standards. Wagambie thanked the Government for assisting to build a world class facility like NFS.

“Compared to the once known Lloyd Robson Oval, NFS provides a more conducive environment to play in unlike the old playing surface that had the bare soil. When we fell we got too many bruises however playing on the smooth surface at NFS was so much better,” he said.

He added that with rugby league being the national sport, the change has been phenomenal with more females taking up the sport unlike the past.

Wagambie is now focused on developing rugby league at the club level and is involved in the mini modified game teaching 6 to 12 year olds the basics of rugby league under the NRL in PNG program.

“This age group must be taught the right skills, attitude and behaviour and rugby league is a powerful tool to disseminate information to the younger people. At the senior level we are imparting the messages about gender equality and violence against women,” he explained.

The Kumul legend encouraged younger players to work hard to wear the Kumul jumper one day, “It is not an easy road, there’s a lot of hard work involved, dedication, commitment and determination but all you got to have is the right attitude. Attitude governs the way we live and the way we do things. If you have the right attitude then you can go places in anything you do in life.”

Wagambie thanked his family, his wife Jacqueline and their six children and six grandchildren, for the support throughout his career.

“It’s not only about coaching but it is a calling from God to work with under privileged kids and youths. I spend all my money on the kids in my club and I’m blessed to have a good understanding family. My wife and children have never once complained when I spend on sports equipment for the kids in the club,” he said.

He stressed that the current pathway for rugby league in the country needs to bridge the gap between the schools rugby league program and local clubs that can recruit them straight after they finish. Then from there they may continue on to the Digicel Cup, PNG Hunters and eventually the PNG Kumuls.

Wagambie commenced at Air Niugini in 2001 with the Property and Facilities Department and is currently the Staff Accommodation Manager.